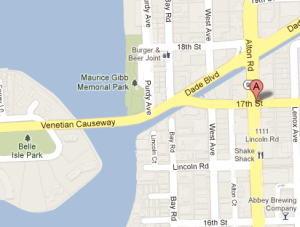 The Miami Beach Planning Board approved the proposed Marriott Residence Inn at 17th Street and West Avenue on Wednesday night, after more than four-and-one-half hours of discussion.

The project, which includes a sleek 116-room hotel designed by architect Kobi Karp and a 66-space mechanical parking garage, now will go before the Miami Beach Design Review Board.

The 6-1 vote came after board members heard from more than a dozen residents from different neighborhood associations who expressed concerns the hotel would add to traffic woes on 17th Street between Alton Road and Belle Isle.

They also heard from supporters of the project, who said an extended stay hotel in the residential part of Miami Beach would add convenient lodging for family and friends of Miami Beach residents.

The property is bounded by 17th Street, the Collins Canal, the path of the planned West Avenue Bridge and a parking lot that serves Boston Market and a retail and apartment building at the corner of 17th Street and Alton Road.

Board members praised the design of the hotel project, proposed to be built on land under contract to be purchased for $5 million from the Miami Beach Housing Authority by the Finvarb Group.

But most of the debate involved impact on 17th Street traffic from the project.

Henry Stolar, the only board member who voted against the project, did so after asking for the vote to be postponed so the development team and city staff could do more work on the 17th Street issues.

“I can’t imagine a better case for doing the right thing than giving this another month….otherwise we are in a position of just getting this done. I do not like haste in deciding something that has taken seven months while a political process takes its course.”

Board chairman Charles Urstadt said the decision was difficult because he believed the project is a good one, but the concerns about traffic were legitimate.

“We are here to balance the greater good to the public with the rights of the property owner.” he said. “We can’t force this to become a park, we have certain limits on what we can do.”

To try and address traffic, board members asked for a slim median on 17th Street to keep eastbound traffic on 17th Street from attempting left turns into the property, and a requirement that a fourth valet be added during peak business hours at the hotel to prevent cars from backing up from the hotel entrance into the street.

Developer Ron Finvarb told board members the hotel would be something the city will be proud of. “This will be a Residence Inn by Marriott. It must adhere to very high standards,” Finvarb said.

“It will not have any accessory uses that will create additional impact or noise…. With all of the conditions we have offered…the hotel will only benefit the neighborhood. This will not be a party hotel. It will be a state of the art hotel with great design and service.”

8 responses to “Planning Board approves 17th Street hotel; Design Review Board comes next”