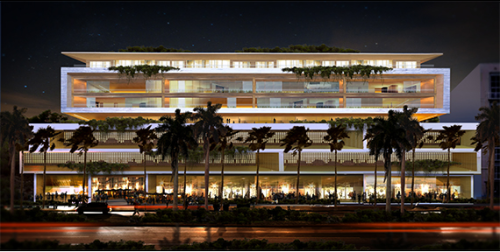 Proposed mixed use development on Purdy. 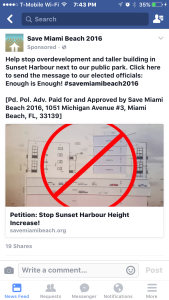 Neighbors objected to the height variance — 90 feet instead of 50.

Beach Towing tried to derail the parking garage — or extract more than a $1 million.

This week, Deco Capital and developer Bradley Colmer withdrew their application for the Residences at Sunset Harbour, a retail, parking and luxury condo project proposed to be built across from Maurice Gibb Park on Purdy Avenue.

In a letter to the city, Colmer said he’ll return with a project within the existing height regularions.

Last week, Miami Beach began enforcing 30-minute time limits on 18 parking spaces around the Belle Isle that were designated as loading zones during the day for workers.

After a week of enforcing the new rules, a couple of things became clear. Many spaces weren’t being used, in part because the 30-minute time period appeared to not be long enough, said Belle Isle Residents Association President Scott Diffenderfer.

Even though the enforcement began after a significant warning period, some people were surprised when they were ticketed and towed.

At the end of last week, Diffenderfer said, BIRA asked the parking department to trim the number of designated spaces and increase the maximum parking time allowed.

Earlier this week, Miami Beach cut the number of loading zone spaces from 18 to 9, and doubled the time allowed, from 30 minutes to an hour.

“The city is being very cooperative with us,” he said. “We are responding to people. We are listening.”

How to get Miami Beach discount on new ParkMobile app

The city of Miami Beach is launching a new parking app for iPhone and Android that will enable you to park at metered spaces and in city garages without worrying about cash; they bill directly to a credit card.

The app, called ParkMobile, is a free download, and city residents who properly register the app save money on their parking.  Registering requires a trip to the city parking office. Here’s the lowdown, from the city website:

Miami Beach residents will enjoy the discounted hourly parking rate of $1.00 per hour in South Beach (south of Dade Blvd/23rd Street) in lieu of the retail meter hourly rate of $1.75. This equates to a 43% discount!

Additionally, ParkMobile has agreed to waive transactional fees for qualifying Miami Beach residents. Miami Beach residents, who are actively participating in one the City’s residential parking permit programs, are automatically pre-qualified for the resident parking rate discount/transaction fee waiver when they enroll with ParkMobile.  Just download the app and start parking!

In order to enjoy the parking rate discount and transaction fee waiver residents who are NOT currently participating in any of the City’s residential parking permit programs, will need to register at the City of Miami Beach Customer Service Center located at 1755 Meridian Avenue, Suite 100, Miami Beach, Florida and provide the following information:

• Valid Vehicle Registration – vehicle registration belonging to the person applying for the exemption. If the vehicle is registered to a different person, the resident must provide proof of insurance.

• Valid Proof of Miami Beach Residency – one (1) of the following items must be provided at the time of registration: monthly bill/statement with the resident’s name and address. Current statement must have been mailed within the last 30 days.  IMPORTANT NOTE:  Internet/electronic bills are not acceptable proof of residency.

Once registered, ParkMobile will automatically update your ParkMobile account status and you may start enjoying your discounted parking rate and ParkMobile fee waiver.

Miami Beach to unveil phone app for parking next week

The city of Miami Beach is finally replacing the failed iPark system with a smartphone parking app that will allow residents to pay at metered spaces and in city garages at a substantial discount.

The free test period starts Monday, May 12, and continues until May 25. During the time, transaction fees for the app, called ParkMobile, will be waived. You can download it to your iPhone or Android for free.

Once downloaded, program the app with your Miami Beach address and a credit card for payment. When the trial period ends, Miami Beach residents who register the app with the city of Miami Beach parking department will get a 43 percent discount if they use the app, paying $1 an hour instead of $1.75 hourly.

ParkMobile is similar to Pay-by-Phone, the parking app used by the city of Miami and Coral Gables and South Miami.  Looks while we’ll need two parking apps as we travel and park in different cities.

The app replaces the white iPark devices the city made available to Beach residents. Those devices, which were battery powered, failed, as did the company behind them.

The developers of a Marriott Residence Inn proposed to be built on a sliver of land between 17th Street and the Collins Canal will present plans to members of the Belle Isle Residents Association on Thursday, April 4.

The 116-room hotel is proposed by the Finvarb Group, developer and owner of at least seven Marriott properties across the country, included the Marriott Courtyard on Washington Avenue in South Beach.

The land where the hotel would be built, north of 17th Street between Alton Road and West Avenue, is owned by the Miami Beach Housing Authority. Finvarb has negotiated to buy it, assuming the hotel project is approved by the city.

On March 13, the Miami Beach City Commission relaxed parking requirements for small hotels in the city’s historic district, and added the 17th Street parking to the the more generous rules. That controversial decision was opposed by the Belle Isle Residents Association and the West Avenue Corridor Neighborhood Association.

At the meeting BIRA representatives complained that the city Parking and Transportation Committee was not asked to review the parking policy change, and the hotel project had not been presented to Belle Isle homeowners. Michael Larkin, the lawyer representing Finvarb, said there had been a meeting scheduled with Belle Isle but it was cancelled because of a death in the Finvarb family.

The project still must be approved by the Miami Beach Planning Board.

Miami Beach commissioners are scheduled to vote Wednesday on new parking rules that would reduce the number of parking spaces required for hotels in historic districts.

The proposed change, as approved by the city Planning Board, would only apply to the retention of historic buildings — with an exception specifically designed to enable the construction of a new hotel on the north side of 17th Street and West Avenue.

What’s so special about this hotel? A good question for the city commission to answer. Because the parking rules on the agenda for Wednesday seem to be written with that one project in mind.

Some background: The Miami Beach Housing Authority owns the pie-shaped sliver of land south of the Collins Canal and just east of the proposed West Avenue bridge, which would extend West Avenue north across 17th Street, the canal and  Dade Boulevard, linking with the Sunset Harbour neighborhood.

The Housing Authority has a contract to sell the land to the Finvarb Group — a company headed by Robert Finvarb that owns and operates a slew of Marriotts in South Florida and across the country.

Finvarb has proposed building a five-story Residence Inn by Marriott on the property.  Designed by architect Kobi Karp, it would have five floors, 116 rooms and only 66 parking spaces in a mechanical garage.

The developers have repeatedly asked the Planning Board to defer consideration of the hotel because the proposed number of parking spaces assumes the city will lessen parking requirements.

And the parking ordinance analysis the city will vote on Wednesday actually singles out the Finvarb project to be exempted from the requirement that the reduction be “only applicable to retention of historic buildings.”

There are areas where the parking reduction won’t apply at all, because of concerns about parking shortages and traffic congestion. One is the neighborhood south of Fifth Street. Another is the West Avenue corridor, which they city contends ends at the doorstep of the Finvarb property — at West Avenue and 17th Street.

Nevertheless, specific  language in the staff recommendation to the city commission mentions Finvarb and this exception to the rule: the proposed hotel would get the .5 space per unit break as long as the hotel agrees it will not have a restaurant, pool, bar or special events open to the public.

The Residence Inn’s restaurant and pool will only be used by hotel guests.

The Belle Isle Residents Association, the West Avenue Corridor Neighborhood Association and and Miami Beach United have opposed the new parking rule, and the new hotel. They argue that 17th Street between Alton Road and West Avenue is one of the city’s most congested areas, and adding the hotel — in fact, creating special rules to accommodate the hotel — just makes no sense.

In a letter sent Monday to the Miami Beach mayor and commissioners, Belle Isle Residents Association President Scott Diffenderfer asked that a decision on the parking rule be deferred so the city’s Transportation and Parking Committee could review it.

Diffenderfer is a committee member, and noted that the group typically reviews ordinances that would change parking requirements.

“I have been a member for five years and I am insulted that an amendment as important and controversial as this has not been presented to us,” he wrote. “There is clearly a breakdown in the process.”

The Belle Isle residents group has been seeking a presentation from zoning lawyer Michael Larkin for months. Larkin has met with selected island residents, but not in an open meeting that anyone could attend.

“Many residents have expressed outrage that the City would even consider reducing parking requirements to allow this type of development on that tiny piece of property which is mere feet away from 17th Street and Alton Road – one of the most congested and dysfunctional intersections in our city,” Diffenderfer said in his letter to the city commission.

Rendering of the Shops at Sunset Harbour.

If you’ve driven down Purdy lately, you’ve noticed that the Sunset Harbour parking garage and shops look nearly finished. The city of Miami Beach says the garage could open within the next week or two.

What you can’t see is the list of retail tenants. Til now.

Floor plan with tenants at Shops at Sunset Harbour.

So far, they include Ice Box Cafe (trying to find out if it is a new location or a move from off Lincoln Road), Panther Coffee (a great spot in Midtown),  Emack and Boilio’s (a New England-based high-end ice cream shop), Tequitzlan Mexican Restaurant and Tequila Bar, Fratelli In Toufala, True Loaf Bakery, Frankie Boutique, Sunset Clothing Co and Thread Count.

In filling the remaining spaces,  “we will continue to cherry-pick each tenant, so that the area continues to develop as an authentic, interesting, trendy, mix of boutiques, shops and restaurants for locals to live, play, shop and dine,” said Melissa Dunn, the broker with Scott Robins Companies.

Ice Box has been a fixture on Michigan Avenue off Lincoln Road for nearly a decade, and opened a branch at Miami International Airport last year.

Emack & Bolio’s started in Boston in 1975 and now has stores in four states, with three locations in Florida — on Vanderbilt Beach near Naples, at Hawks Cay Resort in the Keys, and at Hard Rock in Orlando.

The multi-level garage has 450 parking spaces and 30,000 square feet of retail on the sidewalk level. The garage should have a temporary certificate of occupancy in the next week or so, accounting to city spokeswoman Nannette Rodriguez.

Work on the retail spaces has began on an individual tenant basis, Dunn says.