If you live on Belle Isle or the other Venetian Way islands, boat traffic on Biscayne Bay looks cool —  but creates a heck of a lot of noise and traffic backups on the causeway.

And there will be more of it if the proposed shops, luxury hotels and mega yacht marina known as Flagstone is built at Watson Island.

The Urban Environment League of Greater Miami is holding a forum, Waterfront Gridlock, to tackle the issue Wednesday at 7 p.m. in Miami, at the Miami Center for Architecture and Design, 100 NE First Ave.

The forum will be moderated by Paul Schwiep, chair of the Miami-Dade Citizens Independent Transportation Trust and a UEL board member. 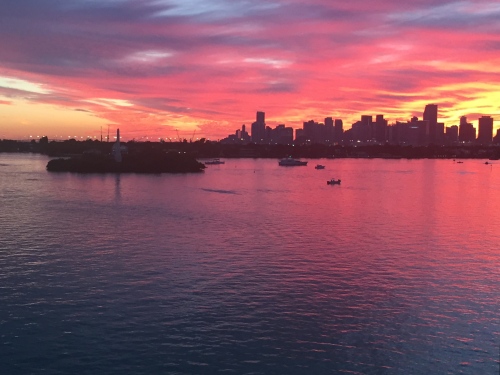 A Belle Isle sunset over Miami, no filter.

Could there be a more beautiful end to a beautiful day? Perfect weather, perfect place.

These are beautiful, from the Grand Venetian, by Herb Frank. 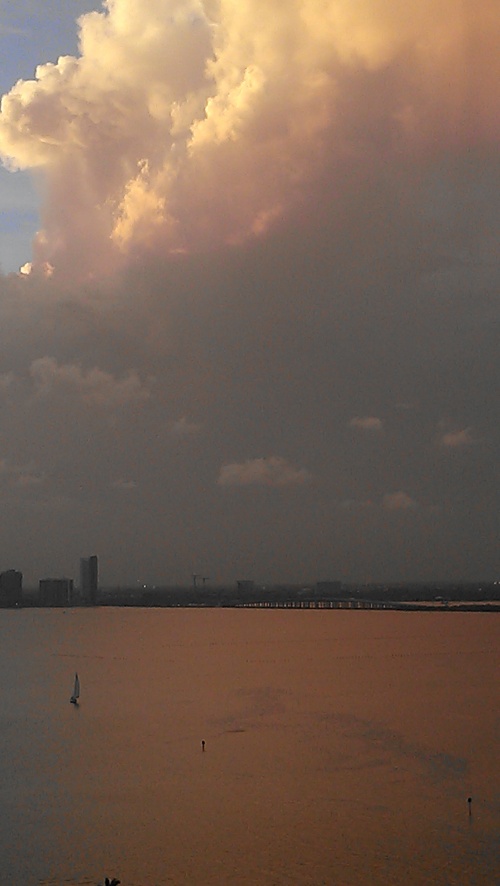 Sunrise over South Beach, and an airborne view of Belle Isle

The islands of Biscayne Bay at first light, Jan. 18.

The Belle Isle Blog had an early flight into Miami International Airport  today, and it produced some good iPhone opportunities to take a look at our home.

Looking west to downtown Miami from a Belle Isle balcony.

In case you momentarily forgot, amid the road construction and condo squabbles, we live in paradise. The view at 6:45 a.m. on Friday, Jan. 20.

The boats mooring off Belle are blogging about us

The S/V Veranda bloggers busted up a marriage proposal.

We’ve watched the boats moor off Belle Isle for years, and we all know this is the busy season for sailing folk who make their way south and into the Caribbean.

Did you know the our off-shore neighbors blog about their Belle Isle and South Beach adventures?

We discovered these links through our usual painstaking research (surfing the web). Two of the blogs, Messing About on First Edition and S/V Veranda relate a great tale of accidentally busting up a romantic and well-planned marriage proposal at the Flagler Memorial in Biscayne Bay.

They also provide interesting commentary on the Pink Snails, visiting the Holocaust Memorial and other neighborhood highlights.